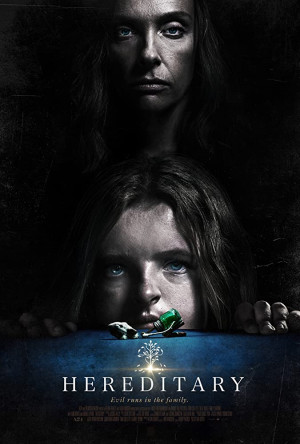 When the matriarch of the Graham family passes away, her daughter and grandchildren begin to unravel cryptic and increasingly terrifying secrets about their ancestry, trying to outrun the sinister fate they have inherited.

While he’s previously made a few short films falling under the horror genre, Hereditary is the first feature-length film from director Ari Aster. Back in 2018, I wasn’t paying as much attention to film releases as I was now. This was a film I was unfamiliar with outside of its song being used on some TikTok videos. When Aster’s second film Midsommar was released last year, I made a mental note to check both films out. Finally, I found the time to sit down and watch Hereditary.

The film begins with Annie (Toni Collette) losing her mother. Her and her husband Steve (Gabriel Byrne), along with their son Peter (Alex Wolff) and daughter Charlie (Milly Shapiro) attend the funeral. In Annie’s eulogy, it’s said that she and her mother were not the closest and that her mother led a very secretive life. A week after the funeral Steve finds out that the grave of Annie’s mother has been desecrated, but doesn’t tell her.

Fast forward a little, and Peter wants to go to a party. Being only 16 he can’t outright leave, so he asks his mother if he can borrow one of the cars for a “school barbecue”. He’s allowed, but only on the condition he brings Charlie with him. Really wanting to go to the party, he obliges. Back at the funeral when Charlie is eating food it’s made known to the viewer that she has a nut allergy, so as soon as I saw nuts being chopped at the party and Charlie eating cake I knew what was going to happen next.

Sure enough, while Peter’s in the middle of doing bong rips in a bedroom at the party, Charlie appears and tells him she’s having trouble breathing. Sure enough, she’s going into anaphylactic shock. He rushes her to the hospital. Charlie has her head out the window, struggling to breathe, when Peter swerves to avoid a deer on the road. Charlie’s instantly decapitated by a telephone pole that her head makes contact with as a result of the swerving. Talk about a freak accident and completely unexpected by the viewer.

In secret, Annie attends a support group for those who are dealing with loss. It’s there she meets Joan, who is dealing with a loss of her own. Joan introduces Annie to séances as a way to invoke Charlie in the afterlife. It’s here that hell breaks loose…almost quite literally.

On the one hand, I can appreciate such a successful directorial debut such as this one. It’s a compelling and grotesque horror film while also sticking to its family focus and highlighting the grief and inner demons the members of the Graham family are dealing with. Hereditary has some intense moments and wastes no chances with the opportunity to make it weird. However, on the other hand, the film overall fell flat to me. Nothing about Hereditary stands out too much. Sure, it has some cool shots and its weirdness and twists make it interesting, as does the soundtrack, but there is nothing about Hereditary that feels memorable to me. It feels like more of a once and done film. The first half of the film was a slow buildup before things finally got more intense and the viewer knows why everything is happening as it’s all pieced together. The film even invokes the stereotype that I feel is found often enough in horror films where the wife (or some character) is experiencing something involving the supernatural, and the husband (or just some other character) doesn’t understand and simply thinks she’s going crazy. While the freakiness of Hereditary was enjoyable, it feels more like an attempt to make the film stand out. Here’s to hoping Midsommar is more compelling.