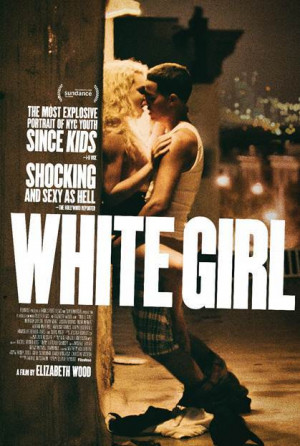 Summer, New York City. A college girl falls hard for a guy she just met. After a night of partying goes wrong, she goes to wild extremes to get him back.

Being the college age, when I happened to stumble across the plot White Girl I figured I would give it a try, not really sure what to expect, as it dealt with characters my age. As a watched the film, and solidified once I finished it, it felt like what a Lifetime movie would be like if they were allowed to air R-rated films, complete with sex and drugs. I even came up with two theoretical Lifetime title following their frequently used pronoun + adjective + third word formula: Her Deadly Love or Her Deadly Idea.

The film opens with Leah (Morgan Saylor) and Katie (Bobbi Salvör Menuez) moving into an apartment with Queens, and soon connect with their neighbors, a trio of Latino men around their age who deal drugs. Next thing you know, they’re partying together, drugs included. It feels shallow: you haven’t gotten much of a chance to know these characters or their backstories yet, but next thing you know more characters are introduced and without hesitation, they’re holed up in an apartment smoking and having sex. Next thing you know, Leah is doing coke, as that is what Blue and his friends specialize in dealing. It is unapparent if she had done coke before encountering and partying with these men, but from then it is all she does, an obsession. While Blue is initially somewhat hesitant, she convinces him to triple the price of what he’s selling at, and from there the money rolls in. Naturally, it’s all downhill from there. Leah continues to constantly do lines and Blue gets in trouble with the law, so Leah does whatever it takes to make Blue a free man. Their romance continues until the end of the movie, but it is nothing but infatuation. The two barely know each other, they’re far more drug dealing partners and partiers than a couple. And yet, Blue thinks this is all happening for a reason, another chance at life. I rolled my eyes. While the focus of the film may not have necessarily been their love story, it does play a critical role in Leah wanting to help Blue, though why she feels so deeply about him is not entirely made clear. Again, the characters feel shallow and unconnected to the viewer.

It may very well be that Leah is meant to be the villain of the story, so to speak — the one who wants to be a hero but is causing nothing but destruction, both to herself and everyone around her — but even then, the story still felt bland and unconnecting to me as a viewer when telling the story of greed, drug obsession, and getting in way too over your head.