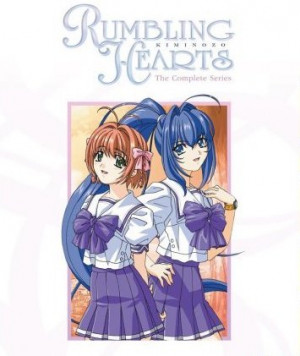 A hypnotic opera where love and loss walk hand in hand, Rumbling Hearts doesn't shy away from the sad song of real life. Fans of the romance genre must surely take note! Tough situations are conveyed with surprisingly realistic emotion, creating a genuine keepsake production for those who know the most intense conflict comes from within. You will be forever changed.

Four high school friends, basking in life's shining promise that everything will be perfect... Until tragedy intercedes. A horrible accident leaves Haruka comatose and her loving boyfriend Takayuri broken by the burden of blame, stumbling in a wounded waking dream. Mitsuki becomes his willing caretaker, but their self-destructive relationship is ravaged by guilt and pain. When Haruka stirs from slumber after three long years, a desperate charade begins. Lips whisper lies and trade secret kisses of betrayal. Some things can never be undone.

Silver linings slip away under every moon. The sunrise is so often bittersweet.

Rumbling Hearts is the title of an anime series I stumbled across last autumn. Its name caught my attention and its IMDB synopsis sounded interesting, so I made a note to watch sometime. Yes, I really decided to watch an anime based on one sentence on IMDB describing its plot:

I don’t mind some romance stories, I enjoy anime, and I figured it’d be interesting given the complications in his love life, whatever they may be. I read nothing else about what this series was exactly about before starting it last week. Lately I haven’t found the time to watch any movies so I’ve been sticking to fitting in a quick episode or two a day.

Color me slightly surprised once I was a few episodes in. While not the focus of the series by far, there are several I guess you could say “explicit” scenes of several characters. Going into the series I was naive and assumed it would be a series about high-school dating. Well, it was in some days, but not just the going out on dates aspect. All aspects of a love life are included in this series: the spending time together on dates, the sex, the fights, the ups, and downs.

What the IMDB description also failed to mention is that Takayuki’s girlfriend, Haruka, winds up in a coma as a result of the accident, pulling their friend group apart but also together in some ways as they continue to grow up and life moves on while Haruka remains almost lifeless in a hospital bed. Time stops for nobody. Cue me being rather confused where after the accident happens, the next episode jumps several years into the future without making that evident at first. That and the flashback episode both threw me off some.

Everyone says Takayuki is such a nice guy, looking out for people. While that may be true, his biggest flaw is that he doesn’t see when people are looking out for him. Everyone is struggling in their own ways due to the repercussions of Haruka’s accident, and they all have to navigate the ups and downs of life and all the decisions and pain that come along with it. You can’t run away from your problems forever, and you can’t do it alone.

Now, with all that said, Rumbling Hearts was enjoyable. My only gripes were the aforementioned confusion when it jumped into the future and I also found Haruka to be rather clingy of a person. Regardless, the story this anime told was great. There was no filler, the series had a story to tell and it did without fluff, making a great drama. I also loved the Ayu and Mayu characters at the restaurant Takayuki worked at. Their comedy was a great breather from the tension and depression of Takayuki’s love life. The series also makes you question the ethics, for lack of a better word, in how one may act should they ever find themselves in Takayuki’s situation involving his girlfriend going into a coma for several years.

It’s been over a decade since Funimation first licensed the series so I can’t see it happening, but I wish they would license the several OVA episodes so I could see what those are all about. Nonetheless, I’m still satisfied with the fourteen episodes.