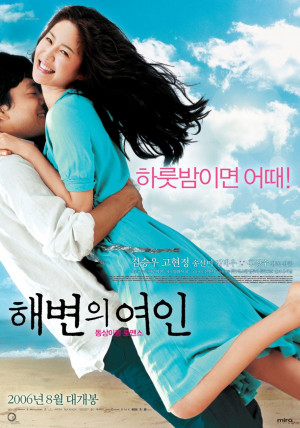 Stymied by writer's block while crafting his latest script, director Kim Jung-rae persuades his friend Won Chang-wook to drive him to a beach resort — where he promptly becomes involved with Chang-wook's girlfriend. Abandoning her and taking up with another woman, Jung-rae winds up creating enough drama to inspire his writing.

In this particular film, we have Kim Seung-woo playing Kim Jung-rae, a movie director who needs inspiration in his next movie script. He invites his somewhat naïve friend Won Chang-wook (Tae-woo Kim) along with, who brings along his girlfriend (or so he claims), Kim Mun-suk (Hyun-Jung Go).

Make no mistake: even though the film’s poster looks more like one that matches a romantic drama, it is far but such a film. While it does involve a love triangle with broken hearts, characters sleeping with one another, and finding out you’re not loved as much as you thought, the film does not have much of a romantic vibe to it. Rather, it is more of dealing with the emotional ups and downs that come with a love triangle and affair, between enjoying it and hiding parts of it from certain people. I suppose it’s possible that maybe Hong Sang-soo’s films are merely a little too complex for me. I’m sure they do have deeper meanings, one I would have to pay more attention to the subtleties to pick up and analyze. If so, it’s passing right by me without the slightest acknowledgment as I watched it. The film feels too matter of fact and directionless. At least in comparison to Hong’s 2014 film Hill of Freedom it didn’t have a low budget feel to it. In fact, Grasshopper Film was streaming a new 4K restoration completed by the Korean Film Archive from the original 35mm negative. I’m still not a fan of Hong’s zoom-in shots, but it at least felt more natural and a little less prevalent than it did in Hill of Freedom. At least the cinematography was enjoyable, as I always enjoy seeing various scenery of whichever country a film was shot in. Past this, however, Woman on the Beach felt like nothing more than a film where a man feels entitled to any woman he lays his eyes on, woven under the guise of going out for dinner together, having a few drinks, and deciding to spend the night together. However, at the end of the day, we’re all fragile human beings looking for love and acceptance.