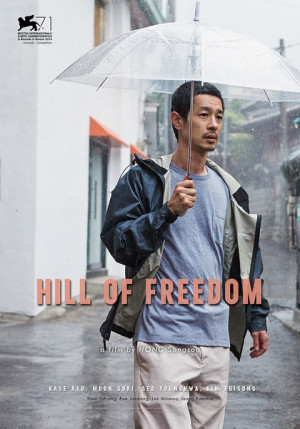 Kwon (Seo Young-hwa) returns to Seoul from a restorative stay in the mountains. She is given a packet of letters left by Mori (Ryo Kase), who has come back from Japan to propose to her. As she walks down a flight of stairs, Kwon drops and scatters the letters, all of which are undated. When she reads them, she has to make sense of the chronology… and so must we. Shot in the narrow alleys, petite cafes and beautiful hanok inns of Seoul’s historic Jong-ro district, a favorite Hong location, HILL OF FREEDOM is a masterful, alternately funny and haunting, tale of love and longing from the great director.

I’ve heard of several films by Korean director Hong Sang-soo, all sounding interesting. Admittedly I have not gotten around to viewing any of them yet, so when I saw Grasshopper Films had his 2014 film Hill of Freedom available for streaming as of last week I figured I would give it a go. Unfortunately, its production felt quite cheap to me, though its way of storytelling is unique. I’m not knocking Hong Sang-soo off quite yet however, as another film of his I’ve been wanting to check out for a while, 2006’s Woman on the Beach, will be streaming also courtesy of Grasshopper Films beginning later this week.

Mori is a Japanese man visiting South Korea. He was previously in the country as a language tutor, during which he fell in love with a Korean woman, Kwon. She is unaware he’s returned to the country and Mori is unable to find her so he wanders around, leaving notes in places she’s previously been in hopes of finding her. During his ventures around the are  in hopes of finding her, he sometimes visits the local coffee shop, named Jiyugaoka (“Hill of Freedom”). It’s at this coffee shop he becomes lovers with the owner during his search.

The story, however, is not told in real time, or chronological order to be more specific. Instead, it’s told through letters. During his visit to Seoul, Mori had written a handful of letters to Kwon telling her about his adventures, and in the beginning of the film we see her handling these letters, accidentally dropping them, and therefore losing the order the letters are meant to be in. We see Kwon reading the letters, now outside of their intended chronological order, so as she reads them we are given the story of Mori’s search for Kwon out of order, instead being told and played out in the order she reads the letters. It’s a clever approach, adding a sort of uniqueness to have the film’s scenes out of order to tell the story, since it’s not a common approach to telling a story through film. It’s worth a mention that this aspect of storytelling does not make the plot confusing. In a way this approach to telling the story reminds me of Christopher Nolan’s Memento from 2000, where the plot plays out in reverse  order.

What’s also interesting to note is that while this is a Korean-produced film, the main character is Japanese, and the film is mostly spoken in English. Mori also comes across as clueless at times, possibly aimless in his search for Kwon. He wanders around lifelessly looking for her, frequently bumping and befriending different townsfolk, just going with the flow with whatever and whoever comes his way, including many broken English conversations as the two having a dialogue speak to one another. This broken dialogue mixed in with the cheap feeling acting gave me a large feeling of cluelessness and awkwardness from the cast. However, seeing how the cast all has extensive credits, not to mention Young-hwa Seo who played Kwon has been in multiple films by director Hong Sang-soo, makes it evident this personality of the characters is intended. Nonetheless, the way the film was shot, especially heightened with its cheesy zoom-in and zoom-out shots throughout, makes the film’s production feel rather cheap at times, equivalent to that of a short film a group of high schoolers would put on YouTube for an assignment in English class, never once coming across as convincing with their emotions and spoken words. The film has its flaws, but its unique storytelling experience makes at least a small memorable impact on the viewer.