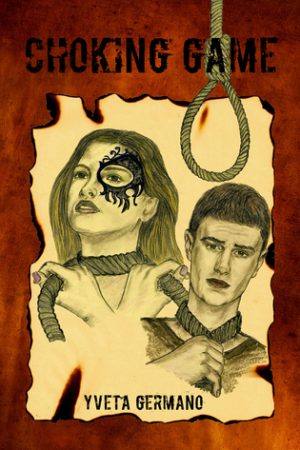 A must-read for teens and parents, regardless of their children's age. Choking Game is a chilling, heartbreaking, and ultimately uplifting story of an alliance so unique, it redefines the meaning of hope.

It is the inner journey of a depressed teenager whose mind is all made up but whose inner voice insists on asking questions and debating MJ's answers to make sure suicide is the only option left. Nothing in MJ's typical middle-class suburban life seems out of the ordinary, but deep inside, MJ is tormented by a series of sad events. Combined with difficulty to make friends, the death of an only friend in a choking game incident, and a nasty rumor that spread through social media, MJ's mind is choked by the outside world he did not create. As the imaginary noose around his neck tightens, his inner voice becomes louder, more annoying, relentless and even cruel; anything to make MJ see the other side of the coin he flipped. And when a quiet boy and a riveting new girl in school connect with MJ, a rare light blazes through the dark world of MJ’s teenage depression.

Inspired by the tragic death of a young boy who made the mistake of playing the dangerous choking game, the book deliberately does not mention whether MJ is a teenage girl or a boy. It allows readers to see the character for themselves, to feel MJ’s struggle, and to experience the journey into the depth of his soul and the world we live in.

Choking Game was alright. It wasn’t amazing….and I wouldn’t quite call it terrible.

The book started rather slowly, but since I won it and the book is special to Yveta, I didn’t want to abandon it. After about two thirds into the story is when it finally got interesting. While the conversations between MJ and her soul were a unique concept, it really made the book drag on in my opinion and some of it was a bit of unnecessary. By the time MJ became friends with Angela and she began telling her story, things really picked up and I couldn’t stop reading from then on. But like I said, it took a long time to get to that point of the story.

There’s also one bit in the story that confused me, unless I missed something. One moment MJ was in school, and next thing she has a rope around her neck at home or something?? The transitions between who’s talking and where MJ, Luke, and Angelica were wasn’t always clear.

Overall, it was a semi-enjoyable story. Personally, I would not really recommend it.

And it goes without saying, but I’ll mention it anyway: don’t ever play the choking game!