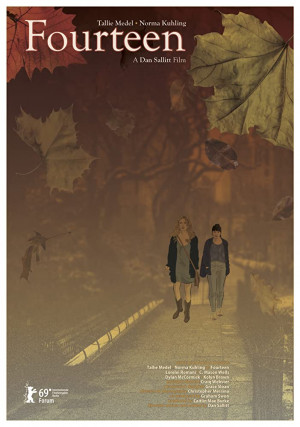 Fourteen, written and directed by Dan Sallitt, traces the friendship between two women through their young adulthood. Jo, a social worker, finds it increasingly difficult to function in the world, to arrive at appointments or to keep commitments. Her substance use is the apparent cause, but those close to her suspect an undiagnosed mental illness. Her friend Mara, who has looked up to Jo since their middle-school days, tries to help when she can and backs away when Jo’s erratic behavior becomes too difficult to endure, in a seemingly endless cycle. Over the course of a decade, as jobs, boyfriends and apartments come and go, the powerful bond between the friends stretches but never completely snaps.

In Fourteen we have two main characters, Mara (Tallie Medel) and Jo (Norma Kuhling), who have been best friends since middle school. The film begins showing some of the time they spend together in their twenties and as it advances, chronicling in total a decade of their friendship. It’s a glimpse into the lives of the women when they meet up and hang out, share the happenings of their lives, and continue to grow up and experience all that the world has to offer while still making time for each other.

It’s a feeling the viewer will recognize all too well: when you’re young you’re able to spend more time with friends, but as you age you have less free time for such things as more responsibilities are piled on your lap whether it be a job, a significant other, or some other type of commitment. Similar is seen with Mara and Jo. In the beginning, the two are almost always on screen together, but by the end of the film, it’s only one of them who reigns on screen.

The film starts by showing the frequent hangouts between Mara and Jo: their hangouts at home, their nights out together, and their nights out with their boyfriends. However, there are times where Jo is not herself. By day Jo is a social worker, but when not on the clock Jo is sometimes a bit different of a person, going through periods where she isn’t herself. As time passes she finds it increasingly difficult to function in the world. Substance abuse could be part of it, but there’s also likely more to it, mental illness. While Mara is best friends with Jo and is there to support her through thick and thin, ups and downs, highs and lows, there are times where for Mara’s own sake she has to take a step back for a breather and focus on herself instead of Jo.

Fourteen’s gentle and understanding approach of Jo and her internal struggle is what makes the film come together. The big scene where Jo breaks down as Mara listens was phenomenal, and I enjoyed that little “aha” moment when you discover why the film is named what it is. However, through all of this, what I disliked about the film was that some of the cast, as they spoke their dialogue, felt like they were reading from a script. Their words were too literal, too robotic sounding, rather than sounding heartfelt and convincing. The train station scene also felt unnecessarily drawn out in an attempt to convey a somewhat artistic scene that comes in short. Nevertheless, Fourteen is an important film showing the ebb and flow of friendship and how mental illness can be a detrimental factor.