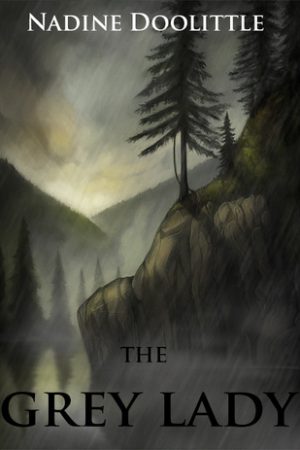 Hester Warnock fell in love with the charismatic Malcolm Driver in 1974 while at his farm-turned-commune, an affair that ended abruptly when a young pregnant girl was found drowned in the lake.
Thirty-five years later, now a successful magazine publisher, Hester is invited back to the scene of the crime to participate in a documentary of Malcolm's life and times as the bestselling author of Spirit Driver.

The documentary never gets off the ground. In the middle of a fierce rainstorm, she finds Malcolm hanging from a tree. Hester holds a clue that proves her ex-lover's death was not suicide but her guilty past begins to haunt her. As she unravels the secrets of the eight suspects, Hester draws closer to the truth about herself.

Set in the wilds of Quebec, The Grey Lady is a psychological thriller which explores the power play between men and women and asks whether crimes of passion can ever be excused.

“There are graces that come to us that we don’t deserve, that we may not even fully recognize when they appear, miracles of the human spirit that somehow set our spirits free.”

In The Grey Lady Hester Warnock, a former lover of Malcolm Driver, agrees to take part in his documentary after he unexpectedly showed up to ask her to make an appearance. She hadn’t seen him in years after they split on bad terms. Malcolm was previously the leader of a commune when they were both much younger, then after that he became a spirital leader and best selling author. Hester, on the other hand, is the publisher of Deeper Vibe. Alongside appearing in the documentary she also made sure she could run a story on Malcolm. There’s one problem though: after the film crew and everyone set to appear in the documentary arrives at the shooting location, Malcolm is found by Hester hanging from a tree – an apparent suicide. Did Malcolm really kill himself, or did someone from the group do it, and if so, why?

The book opens with the police questioning Hester about Malcolm’s death, then the next half of the book jumps back to before the death of Malcolm to introduce you to the characters: who they are, how and why they’re there. While that’s fine, I felt like it dragged on and on. While character development is crucial for any story, it seemed to be a bit excessive. Luckily by the time I was about halfway into the story things finally picked up when, for the most part, the book was done with the flashbacks and instead focused on solving Malcolm’s death. The second half of the book did have the occasional flashback but it was nothing excessive, although the transitioning between past and present was a little confusing at times. On the plus side though, the characters were realistic and intriguing and the descriptions of the setting were great, almost poetic in their wording. I also enjoyed Hester’s struggle over Beth Sherry’s death when she was younger, hence the quote from the book that I placed at the very top of this post. In short, had the whole flashbacks and memories thing been dialled down a few notches and the ending a bit more suspenseful I think I would have enjoyed this whodunnit novel more.