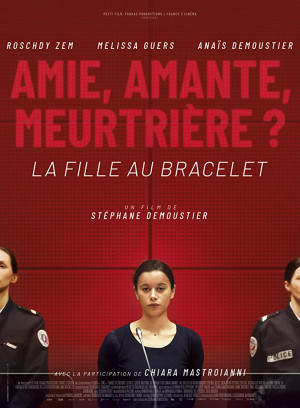 Lise is accused of murdering her best friend at 16 year sold. As the trial starts, her parents stand right by her side. But once her secret life is revealed in court, the truth becomes indistinguishable.

With no other suspects after the investigation has concluded, she’s forced to stand trial and defend herself. The film’s opening sequence shows 16-year-old Lise at the beach with her family, when a group of police officers approach the group and take her away for questions as a suspect in the case of the murder of her best friend. There are no cries for help, no running away, no questions being asked, just law enforcement coming for her, and she’s almost a little too cooperative about it. Fast forward, Lise is now 18 years old and standing trial to defend herself. The majority of the film takes place inside the courtroom. Both sides answer a plethora of questions as evidence is presented to the court, painting Lise as the murderer of her best friend to get revenge after she had posted a sexually explicit video of her online.

There are plenty of circumstances that paint Lise as possibly being the murderer here – lack of outwardly showing remorse or much of any emotion at all, gaps in statements from her and her family members, Lise not answering certain questions, not to mention the fact that her DNA was found on the body. As the court asks more questions, you begin to learn more about Lise and her relationships as a teenager, things not even her parents knew about. This lack of knowledge on her parent’s part presents another small nail in the coffin that doesn’t help Lise’s case since her father had testified that the two are close and she shares important details with him. Through all of this, with her expressionless face and tone, she claims innocence. Her body language makes you feel that the trial, while a minor inconvenience, will be over soon and her life will finally be able to return to normal. The thing is, there isn’t any evidence that would easily waive her of being guilty and get her charges acquitted.

With Lise standing trial, the viewer becomes part of the jury. You listen to the arguments from both sides, you see the evidence, and you listen to the questions and answers as multiple people testify in court. In your head you go back and forth like a ping pong match, coming up with explanations for the different circumstances. The story of friends and relations between those involved are scrutinized and judged in the courtroom and the narrative begins to shift from finding Lise guilty or not guilty of murder to judging Lise and her personal life.

As the closing arguments are given and a verdict is delivered, you find out if Lise is deemed innocent or not and why. The Girl With a Bracelet is gripping, revealing pieces to paint a picture of the events that transpired, all without over-indulging in information to make for a fluid case. I have one main gripe about this film, however: what purpose did Diego serve other than being whom Lise was seeing at the time of the trial? I felt his role added nothing to the plot other than a few extra minutes of runtime.