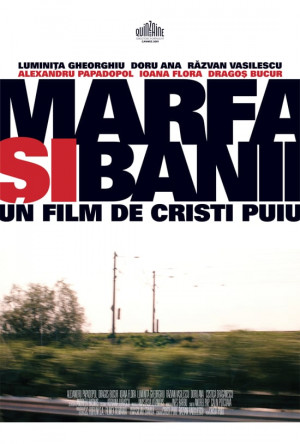 The “stuff” in this debut feature by The Death of Mr. Lăzărescu and Sieranevada director Cristi Puiu – one of the pioneers of the post-Ceauşescu Romanian filmmaking renaissance – is a satchel full of black-market prescription drugs. The “dough” is 2,000 lei (around $500) promised to small-town teen Ovidiu (Alexandru Papadopol) if he agrees to carry the package to Bucharest on behalf of a local gangster (Răzvan Vasilescu). He does, inviting his slacker friend Vali (Dragoş Bucur) along for the ride, who in turn invites his apathetic girlfriend Bety (Ioana Flora). This unlikely trio then takes to the highway – the hilariously deadpan road movie that results is a reminder that Puiu, who originally had ambitions of becoming a visual artist, has cited a viewing of Jim Jarmusch's Down by Law as a key event in his decision to pursue filmmaking.

The story is pretty straightforward: teenager Ovidiu agrees to peddle some drugs to Bucharest for a local mobster, receiving 50% of the dough upfront and 50% upon returning from his delivery. The drive is several hours each way, so he invites his best friend and fellow slacker over, who also brings his girlfriend on the trip. More than he planned for, but the two set forth on the journey. Along the way they notice a car tailing them so they pull over to see what’s up, only to be attacked. They escape but continue to be tailed on their journey and continue to watch their backs.

The majority of the film takes place during the drive, mostly on the way to Bucharest, but also back home. It’s a lot of dialogue back and forth between the characters at times, even feeling like it was improvised as they drove, and the execution of conversation to fill the silence and fear during the trip was excellent. It’s on the way back home that a chain of events unfolds and has Ovidiu coming to some realizations on what exactly he’s doing and how while he wanted to help, sometimes good intentions can wind up hurting others. While the film’s plot may be rather plain and straightforward, the tale it tells between wanting to do good, friendship and conflict, and opening your eyes at the world and how consequences come due to one’s actions, I’d say this has been an interesting introduction to Romanian cinema for me. I just wish the title of this film was a little more descriptive than “Stuff”! I look forward to viewing other Romanian films in the future to see how they compare and what they show. Seeing how it’s been nearly twenty years since this film’s initial release, I think it would also be interesting to see how current day Romanian cinema compares to a film like this.