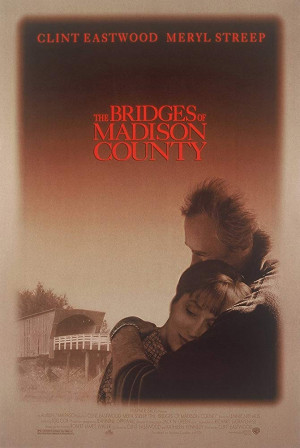 A moving love story about a photographer on assignment to shoot the historic bridges of Madison County. He meets a housewife, whose husband and children are away on a trip, and the film traces a brief affair that is never sordid but instead one of two soul mates who have met too late.

Looking through comments on the film trailer and IMDB, it seems that the film did not touch me and evoke emotion nearly as deeply as it did for many others. Somehow I have never seen a Clint Eastwood film until Saturday evening. Meryl Streep, on the other hand, I’ve only encountered previously because she plays Cousin Topsy in Mary Poppins Returns. I’m familiar with so many of the titles Eastwood and Streep have been in, but have never sat down to see them as of yet. The Bridges of Madison County is actually adapted from a 1992 novel of the same title by author Robert James Waller, as I discovered after the fact.

I enjoy romance films. Not chick flicks, but those that have two characters connect on an emotional level and become each other’s half. When I stumbled across this particular title a couple weeks ago and saw its plot description, it sounded like something I would enjoy. Unfortunately, this was not so much the case. The film opens with adult siblings Michael and Carolyn going over the will their now-deceased mother Francesca left behind. When they find out their mother wants to be cremated and her ashes thrown off the Roseman Covered Bridge, they are confused as this was not the side-by-side cemetery plots they were originally expecting. However, the reasoning soon comes to light: through a series of letters their mother left behind, they find out about Robert Kincaid (Eastwood), a man their mother left and spent four days with that changed her life forever. Michael and Carolyn knew nothing about this up until this point, so of course they’re feeling all sorts of emotions. The film goes from the two siblings into the story of Francesca and Robert, while jumping back to the siblings a few times before returning to a reenactment of those four days.

The film, for whatever reason, failed to hold my interest. I did sit through the whole thing, and did enjoy the scenery, especially the aerial shots at the end, but not once did I cry or feel all that emotional — and this is coming from one who cries rather easily at films. While it did seem real, I just never connected with Eastwood or Streep on that emotional level. I understand where Francesca (Streep) was coming from, however, when she said “I was wrong to stay but I can’t go”. After all, she sacrificed her life to build a family. It would be wrong to simply uproot it and leave them to start anew with a new man, even if her current life is not going the way she expected. She even states that Iowa is not what she had in mind when she was younger and fantasized about America.

I have one lingering question about the whole scenario. While I’m sure there are some densely populated areas of Iowa, keeping in mind that this film takes place in the 1960s and is also in the middle of the country, I imagine that the area is not too densely populated and that those in town are the only people you know and live alongside your entire life. Because it was Robert who happened to come along, did Francesca jump at him only because it was someone else for a change, or did she truly feel something with Robert that she would only feel with him? To me, it felt that Francesca more or less lunged right at Robert – drinks, sex, and a little conversation without connection on a deeper lever. Yes, Robert was a gentleman, but I feel that the way he acted is no different than how any good man should act. But, if what Robert said about how they are no longer two people after those four days and Francesca agreed, then so be it. Every relationship is different, and who am I to judge, whether it be fictional or real.