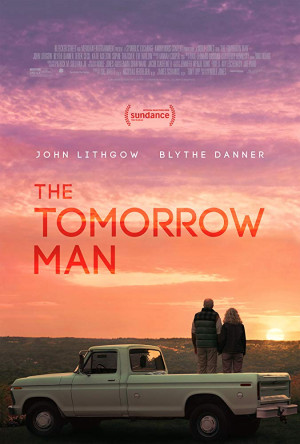 Ed Hemsler spends his life preparing for a disaster that may never come. Ronnie Meisner spends her life shopping for things she may never use. In a small. These two people will try to find love.

The Tomorrow Man is the directorial debut from Noble Jones and stars John Lithgow and Blythe Danner, who play Ed and Ronnie.

I remember back around 2011-2012 was when doomsday preppers were all over the spotlight, especially after the National Geographic Channel had their Doomsday Preppers show. While not quite in the limelight anymore, the plot of this film revolves around prepping for what could happen. Rather than living in the current day, Ed is busy thinking about tomorrow.

Nonetheless, Ed is making frequent trips to the grocery store, some of which is items for the stock room in his garage should something happen. He spends his days in chat rooms with fellow preppers. One day when shopping a woman catches his eye, Ronnie. Ed is a bit awkward and even comes across as rude at times. When he first finds out Ronnie’s name, he exclaims “that’s a man’s name”. He also follows her around town as an excuse to talk to her. Finally when she agrees to go out with him, he tells her “I really like you and it scares the hell out of me”. The two had barely met and I felt that he somewhat forced himself into her life.

You know how the bases go, with kissing, physical contact, and sex? For Ed, his bases are going on a date, and, if he trusts her enough, showing his stock room. Not even his family knows about his prepping. Sure, he talks about what could happen, but they don’t know he is actually actively preparing. I did chuckle when the boxes of condoms were shown in his stock room and it’s said to him “You really are ready for anything”.

Over time the relationship between Ed and Ronnie does continue, albeit with their ups and downs. The irony of their relationship is the whole reason he was initially interested in her was because he thought she was a prepper too, but he was mistaken. It’s something else.

Personally the film wasn’t as good as I thought it would be. Between Ed’s awkward and almost forceful tactics to date Ronnie and the film ending in a way that didn’t surprise me at all, I was left wishing it played out better. Some solid pieces of advice I got from the movie though: “Just don’t do anything I wouldn’t do twice” and “Just do what makes you happy, hurt nobody, what the hell go for it”.