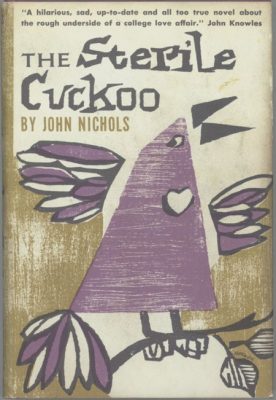 “A hilarious, sad... all too true novel about the rough underside of a college love affair.” —John Knowles, author of A Separate Peace

When eighteen-year-old Jerry Payne first meets Pookie Adams at the Friarsburg, Oklahoma, bus depot, he is hardly aware that this moment marks the beginning of the most memorable love affair of his life. Overwhelmed (and yet secretly enchanted) by her zany, rambling monologue, Jerry is relieved to leave her in St. Louis as he continues to New York. Thinking he’s seen the last of her, he heads off to college, only to be pursued by seventeen lengthy letters, and before he knows it he’s involved with a seemingly crazy, startlingly honest girl who adores him. During the next two years, Pookie helps Jerry leave behind the fun-seeking, beer-blasted fraternity man he has become, as she teaches him to open his heart to her. Then, almost as suddenly as she appeared in his life, she disappears from it, leaving in her wake an eternal trail of love and wonder.

Somehow I came across The Sterile Cuckoo, and it sounded intriguing enough between the mentions of sex and college love affair. Older literally really isn’t something I read too often, since I’m far more apt to seek out a newer novel. It’s always good to switch things up, though, and switch it up I did!

I don’t know if it’s because I’m used to reading modern literature compared to older novels (say, pre-1990’s) but old literature often feels bland to me and that I’m never that sucked in. The Sterile Cuckoo was unique enough to hold my interest, per se, but it was something I had no desire to plow through to find out what happened. The book opens with Jerry Payne and Pookie Adams meeting at a bus depot, and she talks to him nonstop, even though he is not all that interested. She writes to him, he doesn’t write back, then eventually the two do meet and thus blossoms a relationship.

Pookie Adams is very strange and annoying, but at the same time it was very amusing. The book follows their relationship as it grows and goes on, and that’s really it. For the most part, nothing super exciting happens.

What I’m trying to convey is that some aspects of The Sterile Cuckoo, while enjoyable, didn’t make it a great read for me. While it had some parts I felt were good, overall it gave me a “meh” reaction upon reflecting if I liked it or not upon.

Afterward I rented the movie that came out a few years after the book to see how it fared, and the book was better. A film based on the book came out in 1969, and while nice to sit down and watch, I felt was way too different from the novel. All the movie did was take the characters and put them in a relationship. Everything else that happened in the book was omitted, including the book’s ending, which really irked me since, without saying what happened, is a really big and important part of the story to omit!