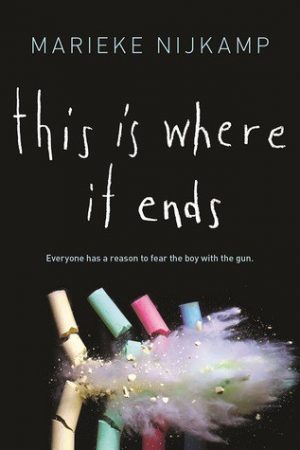 10:00 a.m. The principal of Opportunity High School finishes her speech, welcoming the entire student body to a new semester and encouraging them to excel and achieve.

10:02 a.m. The students get up to leave the auditorium for their next class.

Told from four different perspectives over the span of fifty-four harrowing minutes, terror reigns as one student’s calculated revenge turns into the ultimate game of survival.

More often than not I dislike the first person narrative. I’ve just never really cared for it, and because This Is Where It Ends has four different characters telling the story from their point of view, I really did not care for the story telling. However, after I read a few chapters into the book I was sucked in a little bit from time to time and got over it once things started picking up and didn’t seem so dull in the moments  leading up to the shooting. At the end of each chapter was social media updates from the students locked in the auditorium at Opportunity High, which I thought was a nice touch to the story, but at the same time I feel that it was a little cheesy or cliche, because if I was in danger of possibly being shot I don’t think my first thought would be to go on Twitter and post about it. I understood why they were included, though, as it gives you the thoughts of students other than the four who the story is being told from.

On the other hand, the story was very real and gave me chills multiple times while reading. The shooter, who I’ll leave unnamed for the sake of not spoiling, is an absolute monster. He’s crazy, pathetic, and a coward. I’ve never hated a fictional character so much.

Overall, the story wasn’t nearly as good as I thought it was going to be. It garnered a lot of buzz so I had high expectations but it really did not even remotely meet them. I didn’t care for a lot of the writing and it never interested me too much, so I’ve got mixed feelings about it for liking it and disliking it. Personally I liked Come Sit By Me by Thomas Hoobler a lot more, however the two books deal with school shootings in their plots completely different ways so it would be rather unfair of me to compare the two.