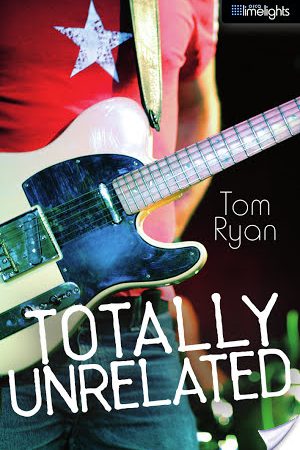 Neil plays guitar with his family's band, the Family McClintock, even though he can't stand the Celtic music they play, he doesn't dance, he hates the outfits, and every single performance reminds him that he isn't as talented as the rest of the family. When his buddy Bert convinces him to form a rock band and enter a local talent show, Neil's playing improves and everyone notices, including a girl who shares his musical interests. He starts to think that all those years of practice might come in handy after all. But it all comes to a head when Neil has to choose between an important gig with the family band and the talent show. He's only sure of one thing: whatever he decides to do, he's going to be letting someone down.

Totally Unrelated is a fun short story about Neil, his family band, and a side gig with his friends. Neil doesn’t care much for his family band, but he is really passionate about the guitar and the girl he meets after a gig. There are some bits in Totally Related that will make you smile and chuckle. There are also some unexpected twists in the story! Overall it was a fun read and thanks to this book I now know what Celtic music sounds like. If you’re curious, here’s some:

If you enjoy short reads aimed at a younger audience, say 5th to 8th grade, you’ll likely enjoy this book. Other than that, I haven’t got a whole lot more to say. Short read, short review. :)