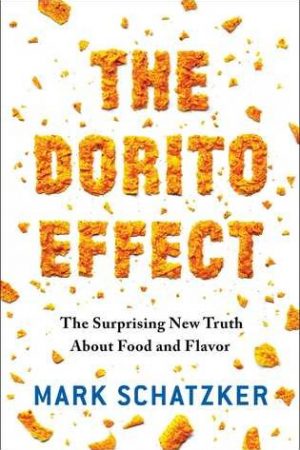 A lively and important argument from an award-winning journalist proving that the key to reversing America's health crisis lies in the overlooked link between nutrition and flavor.

In The Dorito Effect, Mark Schatzker shows us how our approach to the nation's number one public health crisis has gotten it wrong. The epidemics of obesity, heart disease, and diabetes are not tied to the overabundance of fat or carbs or any other specific nutrient. Instead, we have been led astray by the growing divide between flavor - the tastes we crave - and the underlying nutrition.

Since the late 1940s, we have been slowly leeching flavor out of the food we grow. Those perfectly round, red tomatoes that grace our supermarket aisles today are mostly water, and the big breasted chickens on our dinner plates grow three times faster than they used to, leaving them dry and tasteless. Simultaneously, we have taken great leaps forward in technology, allowing us to produce in the lab the very flavors that are being lost on the farm. Thanks to this largely invisible epidemic, seemingly healthy food is becoming more like junk food: highly craveable but nutritionally empty. We have unknowingly interfered with an ancient chemical language - flavor - that evolved to guide our nutrition, not destroy it.

With in-depth historical and scientific research, The Dorito Effect casts the food crisis in a fascinating new light, weaving an enthralling tale of how we got to this point and where we are headed. We've been telling ourselves that our addiction to flavor is the problem, but it is actually the solution. We are on the cusp of a new revolution in agriculture that will allow us to eat healthier and live longer by enjoying flavor the way nature intended.

Once in a blue moon I’ll read nonfiction. As you can tell from my reviews, I’m much more apt to read a mystery novel or some other type of fiction. But if the right topic catches my eye, I’ll all for switching gears and learning. This is what happened with The Dorito Effect. I’m not sure how I stumbled upon it, but I did, and got a copy to read and learn all about food and its flavor in the current day and age.

My mother has raised me on healthy food all my life, buying organic and from local farms when possible. To this day I have never eaten fast food, nor have I ever purchased Doritos. Neither has my mom. Sure, I’ve had the chips before, but it’s not something you’ll ever find in our pantry. The same can be said about so many other common items found in grocery stores. Cheetos, Ritz crackers, Fritos, Oreos, Chips Ahoy, Wheat Things, Chex Mix, or even your popular cereals like Fruit Loops would never be found on our grocery lists. My dad used to drink soda, but that’s it. Unless I’m at a party, I don’t drink it either. My mom cooks our meals every night from scratch, plus I can’t have gluten, so that helps to have me shy away from these types of processed foods mentioned in the book.

That’s not to say I don’t ever eat junk food, though. I especially love my Snickers, M&Ms, and ice cream, and who can turn down pizza? To hear that food is a lot more blander these days was intriguing to me. Part of me feels that if I am eating bland food, how would I know? I think what I’m eating is fine, but maybe there is better tasting stuff out there. (but because my mom buys a lot of organic fruits, veggies, and meats I’d guess I’m maybe only partially missing out since I’m not really eating the fake stuff) The biggest examples the book draws on are tomatoes and chicken. Tomatoes used to be so much tastier and chicken used to be palatable without a wide array of herbs and spices that are now necessary to give it any flavor. In exchange for a higher yield, humans have sacrificed the great flavor of many foods. When I was telling my mom about the book, even before mentioning tomatoes to her, she brought up how my grandfather, he father, can’t stand supermarket tomatoes anymore since they’re so bland. It must be true, then.

Told across nine chapters in an easy to digest manner, The Dorito Effect covers a variety of food and flavoring related topics. Among other things it explores the link between how 69% of Americans are either overweight or obese and how over the last century we have begun to eat more and more in an attempt to get adequate nutrition but it’s mostly just empty calories, and how synthetic flavors are found in so many of the foods we eat today instead of the real flavors the food should have. The best example from the book that comes to mind is that a lot of yogurts, for example strawberry, don’t even have strawberries in it. It’s only got the flavoring of strawberries which was made in a lab from a combination of chemicals. It’s fake flavor added in to trick your mind into thinking you’re eating strawberries when in reality you aren’t, and that fake flavor doesn’t contain any of the nutrients a real strawberry would contain. Nutrients are essential for humans and have numerous health benefits associated with them, and yet they’re being stripped away because it makes the food cheaper.

The book concludes with a six page appendix on how to eat “flavorfully”. The author readily admits that the food isn’t going to be as cheap, but for the flavor it’s worth it. I’d have to agree there. As he put it, though, “sit back and think of all the money you’ll save on ranch dressing, ketchup, and whipped cream”.

All in all, The Dorito Effect was interesting. I liked how in addition to being easy to read even to those who have a minimal understanding (and hatred) of chemistry like me. I also enjoyed the personal stories and experiences Mark Schatzker wove in. I learnt a lot about food as a whole. When it comes to food, like the phrase goes, speak with your wallet.