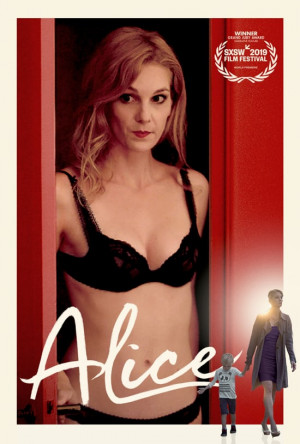 When Alice discovers that her husband has drained their bank account and skipped town, she becomes a sex worker to make ends meet, only to find the work empowering.

I was originally slated to watch another French film today that’s on my list, Le daim (Deerskin), however, due to technical difficulties, I decided to swap it out with Alice, a drama about a woman who finds out her husband has been cheating on her with escorts the entire duration of their marriage. With him having left her suddenly and leaving their bank account drained, she decides to get into the very same sex work her husband was utilizing often to make ends meet. He doesn’t approve when he discovers this — talk about hypocritical!

Alice’s husband François (which the subtitles for the film often couldn’t make up their mind switching between François and Francois) is a bit of an asshole: one day he’s supposedly leaving for work like usual, then later in the day Alice goes to make a payment with her card at the store and finds out it’s been declined and that her bank account is drained. François isn’t answering her calls, doesn’t return home that evening, and also changed their email password. What irks me about all of this outside of François’ behavior is that Alice was completely blind to their finances. Nonetheless, through some minor sleuthing Alice finds a phone number, one leading to an escort service, one that her husband was frequently utilizing and spending all of their money on. With no money to her name anymore and an apartment a year behind payment as she now finds out, she turns to this service and becomes one of the escorts on the team to make some now much-needed money, but also finds this work to be empowering. Along the way she also befriends Lisa, a fellow worker. To top everything, later Alice’s husband comes back asking for forgiveness, claiming he wasn’t in control and it wasn’t him, he was using it as an escape since he didn’t want to fit the traditional father figure….yet the whole reason he keeps visiting now is because of their son. Huh?

The film isn’t too explicit in nature outside of the subject matter and a little brief nudity, and rather focuses on Alice dealing with her newly uprooted life once she finds out about François’ actions. He’s lost without her and he’s convinced she’s lost without him, but in reality, through all of this Alice has learned that she is in full control of herself and can do as she pleases rather than being instructed what to do or acting on behalf of others.

While a mostly-decent story, I felt lacking in connection with the characters, like something is missing. I also felt that the film began a little too abruptly. Usually when a film begins it opens softly, but mere seconds into the film after just a few production logos I was placed in a dialogue between Alice, François, and their son Jules. Personally I’m a fan of a little more buffer between when all of that happens. While I’m happy with the way the film ended and the overall message of being sex-worker positive, the film is not something that stands out to me.