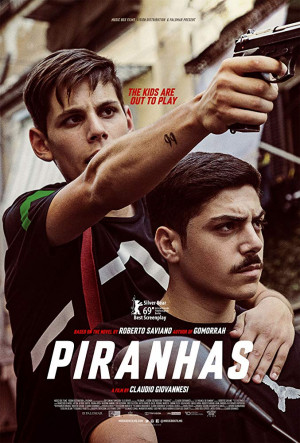 A gang of teenage boys stalk the streets of Naples armed with hand guns and AK-47s to do their mob bosses' bidding.

From what I can recall, I am fairly certain that Piranhas is the first Italian film I have seen. I was not left disappointed by this film at all, it was gripping, albeit a slightly farfetched story about a group of kids around the age of fifteen who end up taking over the streets in their neighborhood.

A street gang goes around collecting money from all the businesses lining the street in Nicola’s (Francesco Di Napoli) neighborhood, including his mother’s. The families can barely afford to pay the mob. He wants to set out and make enough so that his mother doesn’t have to worry about this anymore, so he goes to set out and find a job. He winds up working for the mob, selling drugs to local university kids for some quick cash. Quickly he becomes power hungry and brings along his friends. They’re soon after blinded by all that this money has bought them: new clothes, new rides, girls, and of course an unlimited supply of drugs. Seeing how the film opened with the gang of teenagers stealing a giant Christmas tree and setting it aflame for a bonfire, you can tell you’re in a wild ride. But just how far will Nicola go to satisfy his power hungry self upon seeing what he’s able to get with money and violence?

As I mentioned above, the story did seem far fetched in that I find it hard to believe a group of fifteen year-olds would be able to take over the streets of an entire neighborhood, acquire guns, and commit all sorts of violence. I’m sure it’s very much a real thing for some to wind up on that side of the streets at such a young age, but for a whole group of teenagers to do such a thing in such a short period of time seems a little too stretched for me to be seen as realistic. Nonetheless, I found myself enjoying the majority of the film, especially how it ended. It also clued me in to how much of a cutie Nicola’s love interest, Letizia (Viviana Aprea) is, so that’s always a plus. Most, if not all of the cast, made their debut in this film, as it was a bunch of unknowns. They all did a great job.